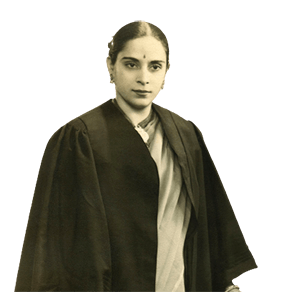 In her long and remarkable career, Justice Leila Seth carved a legacy far greater than the sum of her many parts. She was a visionary not only in her approach to the law, but in all aspects of social justice.

The first woman to top the Bar exam of England & Wales in 1957, the first woman judge in the Delhi High Court, and the first woman Chief Justice of a State High Court (Himachal Pradesh). Her chosen path was to bring the ideals of the Constitution to life. While Justice Seth believed in the power of legal literacy to raise rights awareness, she knew that the law is a springboard; it is people and movements that bring change.

In her lifetime, she saw the tide turn – women demanded rights, and the chain of awareness, assertion, attitudinal change and action inched forward. Justice Seth fought diverse cases including on constitutional law, criminal law and tax matters, unusual for the few women practicing at the time. Some of her landmark work includes recommendations to the 15th Law Commission of India resulting in the amendment of the Hindu Succession Act in 2000, which acknowledged the daughters' right to family property. In 2012, she was also part of the J.S. Verma Committee, constituted to bring justice to victims of sexual assault. Justice Seth wrote her autobiography - On Balance (2003), a children’s book on the Constitution of India -We, The Children of India (2010), and Talking of Justice: People’s Rights in Modern India (2014), which engages with the issues she dealt with across the five decades of her career.